1. I unscrewed the 5mm hex nut with an allen wrench and then removed the hub. I sprayed everything down with brake cleaner to minimize the toxic dust, letting the runoff drain onto a drain pan. 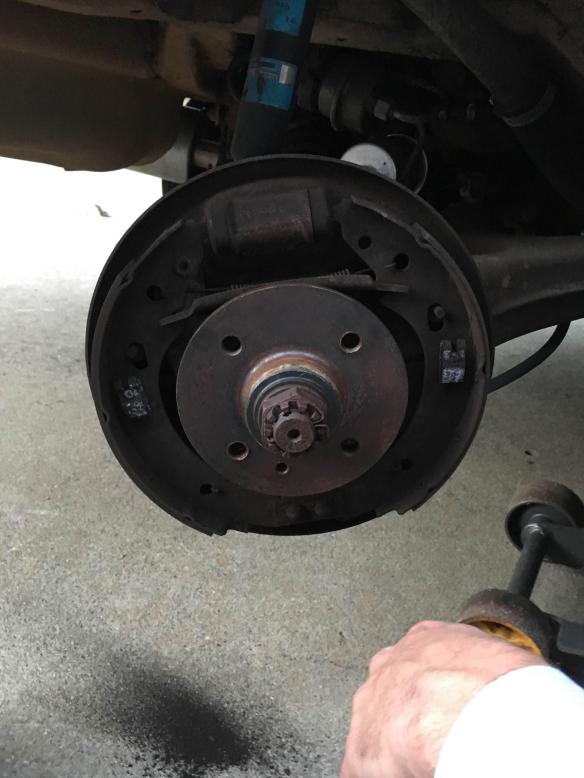 2. I then unfastened the CV Joint bolts from the trailing arm splined axle using an electric impact wrench and rolled the CV joint out of the way, propping it up and out of the way. 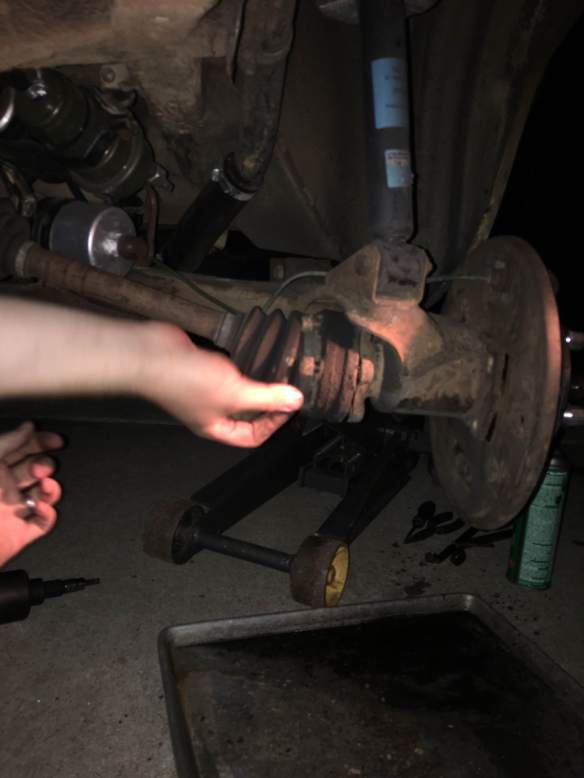 6. I unscrewed the brake line from where it attaches on top of the trailing arm and let it drip into a drain pan. My rear brake lines are not OEM I think. The bolts that attached were a 12mm on the rubber side and a 7/16 on the metal line side. I then unscrewed the four bolts of the brake shield, removed it and set it aside.

8. My outer wheel bearing had disintegrated. The cage had crumbled into pieces and the bearings were rolling around loosely inside the races. The inner race of the outer bearing just came out by hand and spilled ball bearings all over the ground. I removed the cylindrical spacer that sleeves around the splined axle between the bearings, wiped the old, brown grease off and set it aside.

9. The bearings butt up to a little shoulder on the inside of each side of the trailing arm. The races of the bearings sit up higher than the shoulder so I took a flat-ended metal punch and tapped the old inner bearing out. It came out pretty easily. On the outer bearing, all that was left on mine was the outer race but the outer bearing has a spacer between it and the shoulder inside the trailing arm that sticks up slightly higher than the shoulder but not as high as the race so I didn’t want to mar it up with the punch. Instead I used an appropriated-sized bearing press tool to drive that outer race out of there. The spacer came out with it intact and undamaged. I wiped all the old grease out of the trailing arm. 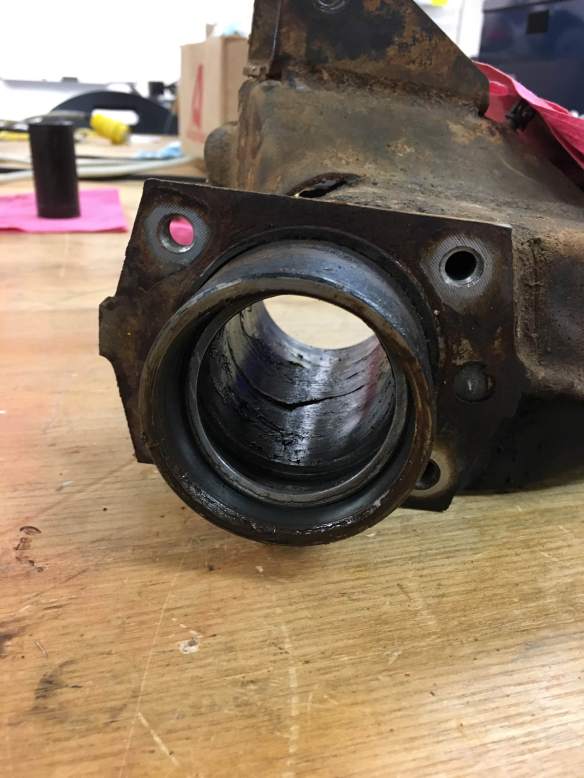 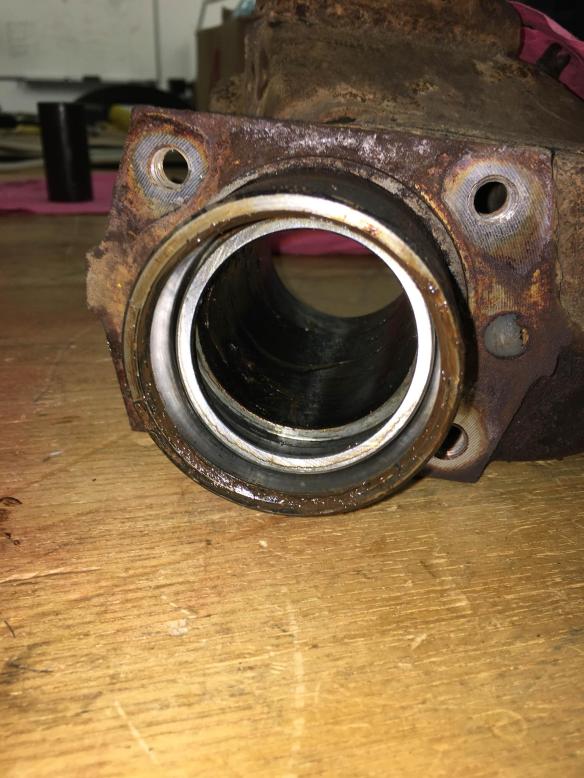 9a. I went ahead and replaced my trailing arm bushings while I had the arm out. I took a drill press and used a long circle-cutting bit to carefully cut the rubber around the old metal bushing centers. That weakened the bushing enough to where I was able to spin them and pull them out pretty easily. Then I took the new bushings, put a thin coat of petroleum jelly on them and drove them in with an arbor press. They went in easily and popped out the other side, seated correctly.

10. Next came the arbor press. I packed the new bearings by hand. I put a big glob of grease in my hand and squished the new bearing into it like dipping a chip into hummus until the grease squirted through the other side of the ball bearings. I did so all the way around the bearing and then I wiped the grease out of the middle of the bearing and then smoothed the grease around the bearing with my finger so that it looked like a nice, jelly-filled jewish wedding cookie. You want a nice, even layer of grease in between all the ball bearings–no air bubbles.

12. Before I put the grease seal on, I packed a bit of extra grease into it. I figure it can only help and it won’t hurt anything. I carefully drove the new grease seal into place on top of it using the press and a suitably wide socket head. I had to be extra careful with the seal. It slipped in awkwardly at first and I had to take a hammer and gently tap it until it was straight and then drove it in the rest of the way until it made contact with the bearing. 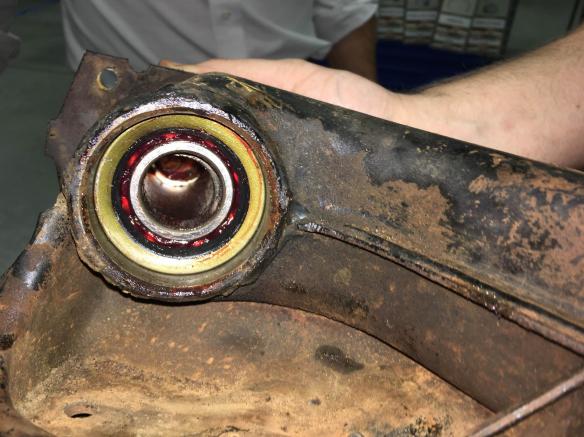 13. I put the metal spacer sleeve into the space between the bearings. I just lined it up with the center as much as I could. You don’t have to be extra careful with it because there’s a slight space between it and the bearings so it moves around pretty freely inside the cavity. The thin layer of grease on its end edge is enough to pretty much hold it in place as long as you don’t yank the assembly around.

14. Next I did the same as in step 12 with the outside bearing, making sure to put in the metal spacer shim first, the bearing second. Do the same as the first. Press it in, supporting the outer race with a bearing press tool until it makes contact with the inside shoulder. I left the outside grease seal off until after I pressed-in the splined axle. 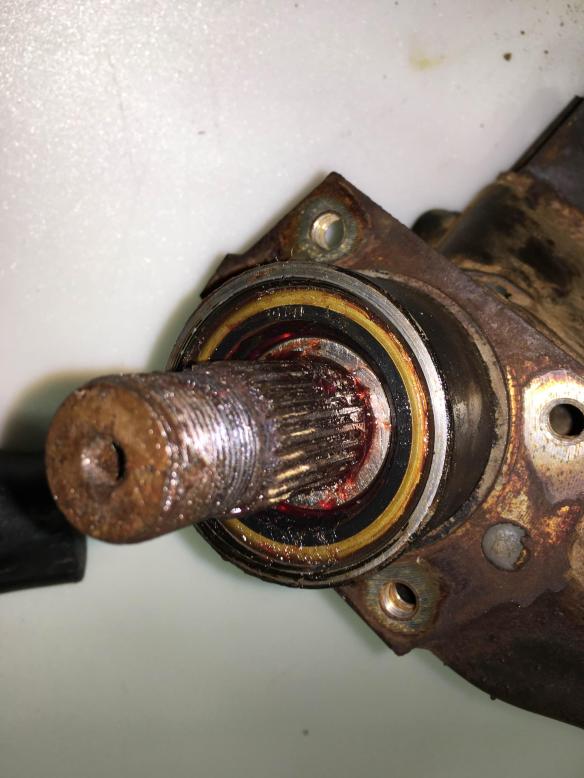 17. Next I used the same socket as in step 16 to drive the new grease seal into place. I also packed this grease seal with extra grease. 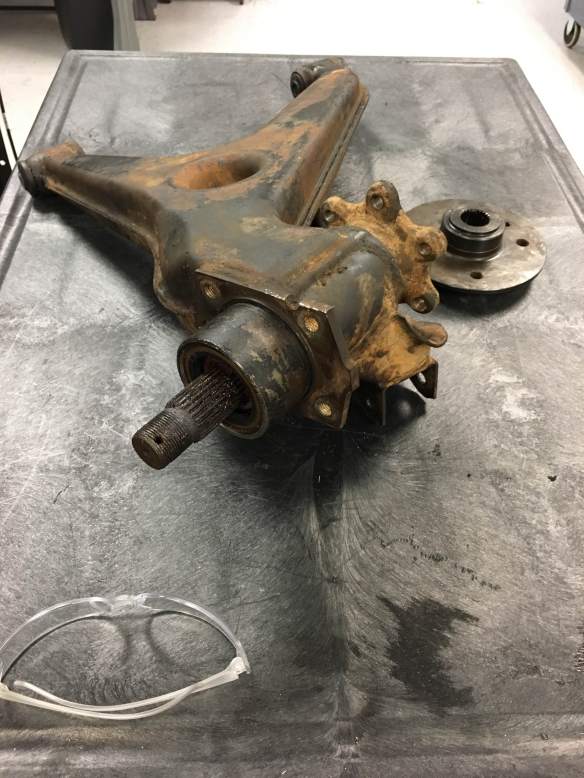 19. Reassembly is the reverse of disassembly. I didn’t really torque anything to spec. I just tightened the three trailing arm bolts back into place as tight as I could. The big question for me was the castellated nut. I re-tightened it with the air impact wrench, then I put the hub and tire back on and I could wobble the tire laterally quite a bit, which was alarming. Then I took the tire and hub back off and, using a socket wrench, was able to tighten it a further 1/4 turn. Then I hit it again with the impact for good measure. When I reattached the hub and tire this time, the wheel was rock solid. No wobble at all. It drives great now but I’m paranoid about the driver’s side bearings now so I can’t enjoy it. I need to do that side too.

This was a very rewarding job and I want to do the other rear wheel now in the interest of uniformity.